Real Christmas Tree Buying Guide – everything you need to know!

The second weekend of December is traditionally the most popular time for people to visit their local garden centre, farm or supermarket to purchase a real tree for the Christmas period. Over seven million Christmas tree are purchased in Britain every year, according to The British Christmas Tree Growers Association (BCTGA). With more choice than ever, it pays to do your research and know what you’re looking for.

Here’s an overview of the most popular varieties to help make your choice much easier. 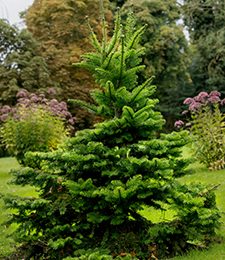 Norway Spruce has been around since Victorian times and is still a firm favourite today with up to ten percent of people choosing one. The Norway Spruce is characterised by its bushy appearance and lovely fragrance, but it has a tendency to drop its needles more than other varieties. It’s needles are also spiky so is an impractical choice for households with pets and young children. Despite its Scandinavian roots, the Norway Spruce grows in UK conditions meaning they are widely available and reasonably price. 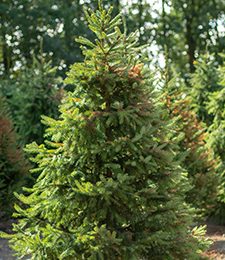 Nordmann Fir is by far the most popular variety of tree with over 80 percent of households choosing this type according to the BCTGA. With its strong yet soft-touch branches, dark green, glossy appearance and traditional conical shape, the Nordmann Fir is a reliable choice which, if watered well, will shed minimal needles and last the Christmas period and into the New Year. 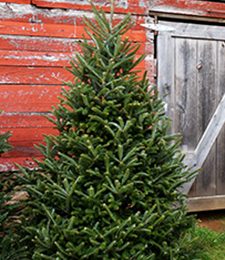 Fraser Fir is extremely popular in America but not so widely available in the UK so can cost a bit more. If you come across the Fraser Fir it’s a worthwhile choice as it looks elegant, gives off a lovely smell and has a traditional shape. Better still, it also offers great needle retention. It also tends to have a much slimmer profile than the Norway Spruce and Nordmann Fir so is perfect for tighter spaces. The best of the rest include the Scots Pine, which has long twisted needles, perfect for holding heavier ornaments, the Noble Fir, which has a beautifully symmetrical shape and super-strong upturned branches and the Blue Spruce which has a bluey tone to it.

When choosing your tree, check its freshness by running your hands through its branches. If it’s fresh, the needles shouldn’t fall off.  You can also do a similar test by raising it off the ground and gently tapping it on the floor. Also, don’t buy a tree that’s sold in a net. The net strains the branches and causes it to dehydrate much sooner. Nets can also hide bare branches and wonky tops!

Before you set off it’s also worth reading our Christmas tree selection tips post, which provides a handy checklist to help you pick the right one for your home. It’s easy to get carried away and end up with one that’s way too big for the car!

Of course, if a real tree isn’t an option you can always consider an artificial one. Artificial trees represent great value for money, are guaranteed not to drop their needles and will last a long time if you look after them. A customer of ours recently emailed us a picture of a pre-lit artificial tree he purchased 15 years ago. It still looks just as good today as it did 15 years ago and during that time he has never had to change a bulb!

At ChristmasTimeUK we offer a whole range of quality artificial trees, ranging from 4ft to 13ft in various finishes, shapes and styles to suit your taste and available space.

When’s the best time to put up your Christmas decorations? Christmas collaboration with House Lust

Making an entrance – Wreaths, door decorations and other welcoming ideas

A colourful Christmas – What is the best option for you?